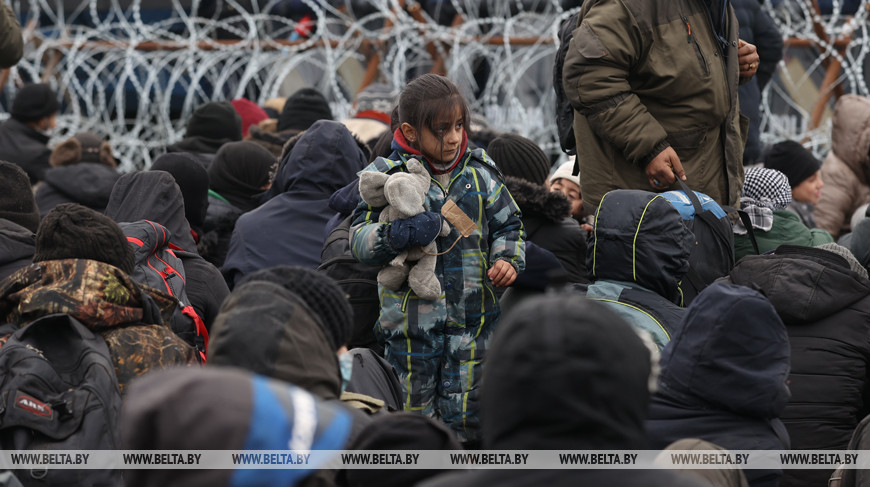 Belarusian President Aleksandr Lukashenko disclosed some details of his recent telephone conversation with Germany's acting Chancellor Angela Merkel as he spoke at a meeting to discuss the situation at the state border on 16 November, BelTA has learned.

The parties discussed the refugee issue and the situation at the border. The head of state made a proposal to resolve the situation. The parties agreed not to reveal the details for now. Angela Merkel will need some time to discuss the issue with the members of the European Union. The leaders agreed to have another telephone conversation afterwards.

“The first issue was related to the refugees and the escalation of the situation at the state border. We have reached common ground that no one needs escalation - neither the European Union, nor Belarus. We cannot allow things to escalate into a military confrontation, no matter how much someone may want it. We have never wanted such escalation. I have just said that there are about 20,000 armed people on the other side of the border. We have not deployed a single platoon there, on the border. The commander-in-chief of the Armed Forces did not give such an order. However, we are ready to counter any aggression from the other side. I gave such orders to the defense minister, other generals and law enforcement agencies,” the president said.

The influx of refugees was the second issue that Aleksandr Lukashenko and Angela Merkel discussed over the phone. “Of course, the European Union and Belarus have different views on the matter. They are very much concerned about the inflow of refugees to Belarus,” the Belarusian leader said.

“They are absolutely unaware however that it is not us who have invited the refugees here. They are unaware that as of today we have sent back some 5,000 people (4,681 of them two days ago) in the autumn. We do not collect refugees all over the world and do not bring them to Belarus, as Poland claims. We allow entry to those who come to Belarus legally. Just like any other country does. Those who have violated the law are sent back home immediately. We have sent back some 5,000 such people. I have informed the German chancellor on it,” said Aleksandr Lukashenko.

More details were voiced at the meeting. Among those sent back home were 3,042 nationals of Iraq, 696 of Iran, 487 of Syria, 19 of Afghanistan, 215 of Egypt, and 242 of Libya. “This is how many people we have sent back. The majority of refugees trying to get into Belarus illegally were from Iraq and Iran,” said the head of state.

“The third issue we discussed (I insisted on it) was the refugee camp, the main problem of today. More than 2,100 people, perhaps even more, have gathered near the Bruzgi border checkpoint. You know that they camped out there, some 800 meters away from the border checkpoint and stayed there for a week. Yesterday they left that place and approached the Bruzgi border checkpoint. This is the biggest problem today. The problem, as I told Angela Merkel, is that if we fail to save these people, it will be on us, on Belarus and, more so, on the European Union that did not let these refugees in. Something has to be done about these people immediately,” the president said.

“I have made a proposal to resolve the situation. I will not specify it now. We agreed with Angela Merkel that we will not talk about it right now. She has asked for some pause to discuss this proposal with the EU members,” said Aleksandr Lukashenko.

“You have all seen what is going on there. You are welcome, bring it to the border, pass it through the barbed wire you put up there. If you want to remove the barbed wire, we do not mind. Remove it and come right up to the refugees. There are no obstacles here and there can be none. These are just lies, fake news spread to escalate tensions and set the European Union and the people who live there against Belarus. They want to show us as barbarians who do not let in those who bring humanitarian aid for the refugees,” said the president.

Aleksandr Lukashenko added that the parties also discussed the allegations that Belarus did not let the UNHCR representatives visit refugees. “I personally saw the TV footage showing how they visited the place and talked to the migrants. The media informed the people. I advised the chancellor to watch news at least on the internet. We have showed everything. Therefore, all we can see is lies and anti-Belarusian hysteria which is fueled by, first of all by Poland, Lithuania, Latvia, and unfortunately, Ukraine (as far as I could get it during our 50-minute conversation with the German chancellor),” said the Belarusian leader.

Aleksandr Lukashenko and Angela Merkel agreed to keep in touch until the problem is resolved: “We will talk it over again in the near future. I have already said that I would like to hear a response to my proposal I made to Mrs Merkel to resolve this conflict. We also agreed that our Minister of Foreign Affairs Vladimir Makei and [High Representative of the European Union for Foreign Affairs and Security Policy Josep] Borrell will stay in contact to discuss these issues.”

The president said that today he also plans to talk with Russian President Vladimir Putin: "Please report whether we need some kind of military-technical or defense assistance (after all, this is our common border, the border of the Union State). I will talk with the Russian president and ask him to provide, if necessary, appropriate assistance, without dragging them into this refugee crisis. Because you see that the scoundrels of the collective West put all the responsibility on Russia that has nothing to do with this yet.”

As for the refugee camp, the head of state noted that Belarus has organized the delivery of firewood, put up tents to feed children, women, including pregnant women, and a first-aid station. "It's very important. I'm asking you not to curtail this aid because the weather is cold. More and more children are getting sick. We need to take care of them until this situation is resolved. I think it will happen soon," the Belarusian leader said.

“We are not to blame for anything. We are doing everything possible to protect these people. The most important thing is to prevent attempts to smuggle weapons into this [refugee] camp. You understand that some forces are very interested in shootout. One shot and a hot confrontation is inevitable. We have been taking enormous efforts to prevent this,” Aleksandr Lukashenko stressed at the meeting.

As for some refugees making their way from the Belarusian territory into Poland, Lithuania and Latvia, Aleksandr Lukashenko noted that Belarus has information from sources, both official and unofficial, of the neighboring countries: "Every day more than 600 people break through from Belarus into Poland, Lithuania and Latvia. We recognize this and openly say that according to their sources these are 660-700 people a day, except for people from this camp."

He also drew attention to the fact that refugees who broke through into Poland are caught before they reach the border with Germany and brought to the Belarusian-Polish border. "Do you know what these scoundrels do? They catch these people in Poland before they reach the border with Germany. By the way, these refugees get the help of Poles, Ukrainians and Germans (they primarily pick these people from the border and take them to Germany). If they are unlucky to make it to the German border, they are grabbed by Polish law enforcers, beaten and brought back to the state border. There are 330 such people, in addition to those in the camp of more than 2,100 people. 330 people are between two barriers: our engineering structure, which we have inherited from Soviet times, and the fence that Poland has recently built. These are exhausted and beaten people, in limbo, on the state border waiting to break through the barbed wire again and enter the territory of Poland.