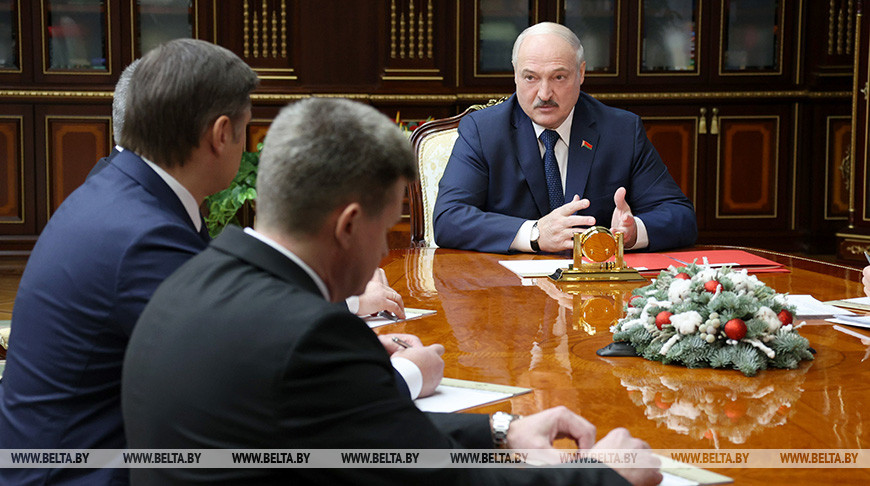 It is necessary to more actively use antimonopoly tools in order to influence pricing practices. Belarus President Aleksandr Lukashenko gave the relevant instructions to the newly appointed Antimonopoly Regulation and Trade Minister Aleksei Bogdanov on 21 December, BelTA has learned.

Aleksandr Lukashenko said: “We have lots of problems in antimonopoly regulation just like in post-Soviet republics. It is necessary to use antimonopoly tools in order to somehow suspend prices, keep them in the affordable range. While understanding that Belarusians are not quite rich for us to let loose prices so that everyone will live a good life. Prices will not fall by themselves... They are not falling anywhere for some reason. I've been watching for quite some time, they are not dropping anywhere, particularly in the post-Soviet republics. I keep an eye on Russia. They've learned how to regulate prices one way or another.”

The president said: “It is up to you how you do it: via profit margins, profitability of retailers or some other way. I'd like you to submit such proposals to me, too. On the whole, I count on you a lot. It is not an easy job. It is necessary to create a system and that's it. There is no system for now.”

Aleksandr Lukashenko stressed that the ministry and the trade industry as a whole are quite complicated. “During any survey of our society people mention the problems your ministry is supposed to take care of. This is why trade organization and economy are very interesting and rather complicated spheres,” the head of state said.

Aleksandr Lukashenko noted that in the Soviet period things were a bit simpler and pricing was stable. “Now we've embraced the market. People often complain about rising prices and high inflation. It is truly so. Market relations, so to speak. Today we understand that there are no market relations. This idea was floated to us from across the ocean by those, who have tonnes of money. And you know they can easily print more money if they have a shortage. It is easy for them to rely on market rules,” the Belarusian leader stated. “This is why we cannot follow their example. Although we cannot [afford] chocking the production sector with stable prices: if we set prices and manufacturers cannot live with these prices, the production sector will go down. These things require very fine tuning and you will have to take care of it all.”

Aleksandr Lukashenko also gave advice to Aleksei Bogdanov regarding personnel selection for his team: “There are very many sensible people in the trade industry. In the state trade. You will find good specialists there. You are a young man and should not be afraid of pulling young people closer to you so that they could be your pillar.”

The president is convinced that Aleksei Bogdanov's sport background will also help the new minister do the job. “Athletes have special temper. As a sportsman I understand it: if you start some work, you have to see all the way through. I think your sport background will help you with that. It is very important,” he said.