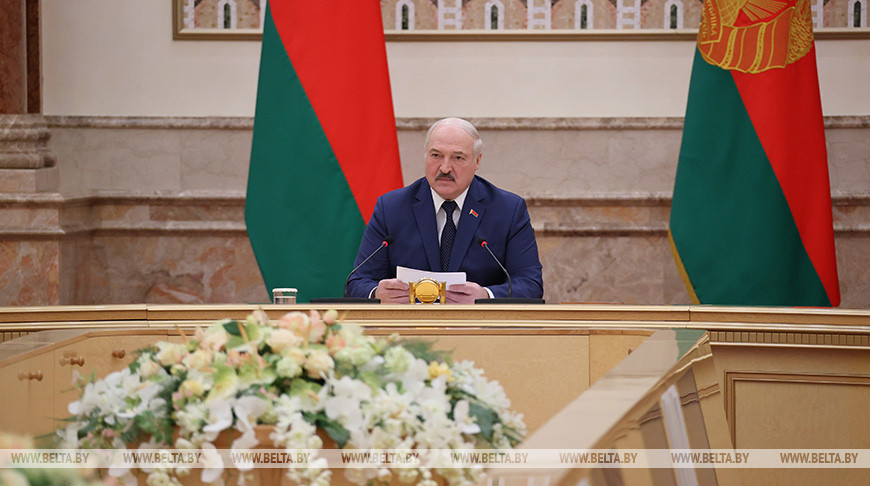 What we need today is cohesion and discipline, especially in the government, Belarusian President Aleksandr Lukashenko said as he hosted a government meeting to discuss Belarus' response to sanctions on 16 December, BelTA has learned.

“We need cohesion and discipline more than ever. Take a careful look at the administrative personnel: we have too many administrators with the anti-government position. What surprises me most of all is that there are many such people among healthcare administrators (especially in Minsk). They think they are very smart and they can do the jobs of the prime minister, the head of the Belarus President Administration, speakers of the parliament, or everyone else,” said Aleksandr Lukashenko.

The president emphasized that no one forbids anyone to have their own point of view. “Everyone is entitled to their own point of view, and so you are. I don't mind it. However, all of us sitting here and the executives I have just mentioned should stay within certain limits. If you want to be absolutely independent, if you want to call for sanctions, fight against the government, and so on, you are welcome to join those self-exiled in Lithuania and Poland. More and more of them want to return home. Yet, you are free to go there, take these posts and call for sanctions. You know you will be out of reach for us there and you will not get six or eight years in prison under the new law,” said the head of state.

“However, if you are in charge of a team, you owe an allegiance to the state, no matter whether you run a private or state-run enterprise, and double so if you are a uniformed officer or a civil servant. You should have a clear understanding of your role and place. Otherwise, as I have repeated many times, any actions against the state will be considered as betrayal,” Aleksandr Lukashenko warned.

The head of state also stressed that there should be no excesses, ‘purges as in the 1930s'. "They say there were repressions and stuff like that back then. I am not sure how things really were. These historical facts are twisted to fit the narrative. But let's assume that 1937-1939 was not a good time in our history: people were pursued, imprisoned and so on. The war began, and there were no generals to lead the troops as they were imprisoned. They were let out and were the first heroes defending the Soviet Union. So, it is important that we do not repeat those mistakes,” the Belarusian leader demanded and warned against repressions against people who signed nomination papers of alternative presidential candidates. “Indeed, we need to know what kind of people we have in the state apparatus. However, we will not be able to identify all of them anyway. There were thousands of them [in the country] who put their names on the nomination papers of opposition candidates, so what? We need to deal with important stuff. Believe me, over the year people's sentiments have changed completely.”

According to Aleksandr Lukashenko, this is evidenced by the results of the sociological study. "Today or tomorrow we will release them: their results are strikingly different from those we had a year ago. Although last year's results were OK too," he said.

"Therefore, we should identify all those who left their signatures, especially those who work in the vertical of power. But there is no need to pursue them, to hold them accountable. For what? Aren't there other more important things to do? Moreover, many have changed their allegiances for the third time already. But those who have violated the law, encouraged people to violate the law (we also have a lot of them) must be dealt with. But this must be done carefully, without an all-fit-measuring stick, or otherwise we might turn into someone we detest, into some barbarians and punish innocent people. Therefore, we should tread carefully," the president emphasized.

He urged everyone to do their jobs, to lead people and test them in work. "Performance, not political views should be the criteria to determine whether these people are fit for their jobs. The rest is the responsibility of special services," the head of state added.

Aleksandr Lukashenko also spoke about the proposals to compile a list of officials who should follow various extremist Telegram channels. "There is no need to compile lists of those who should do it and who should not, as the head of the Belarus President Administration has proposed. This is nonsense," the president said. “Let heads of the regional and district administrations make decisions themselves. Bans have never done anything good. But if we no longer trust ourselves, then, I think we should really give the power over to the self-exiled opposition. Be vigilant and careful with what you propose. Other problems are many and we need to address them."

The head of state stressed once again that traitors would never be forgiven. “There can be no forgiveness for those who tried to turn the country upside down and give it away. We know them. We have identified dozens, even hundreds of them. We have shut down all the organizations that had received money from abroad to organize the coup and unrest in the country. No matter how hard it was, we knew what the consequences would be. Now they are asking to reopen them. This will never happen,” said the Belarusian leader.

According to the head of state, any foundation or organization can work in Belarus as long as they work for the benefit of the country. “They can help the sick, the disabled, Chernobyl victims, people in need, people with disabilities, children and so on. Such organizations are welcome here,” said Aleksandr Lukashenko.

“We need to put an end to this chaos today. We need to build a new Belarus,” the Belarusian leader said.